Five years after Michael Woolfson of Greenford Caravans purchased a derelict park in beautiful countryside on Box Hill in Surrey, he has transformed it into one of the finest mobile home parks in the South-East.

To develop a park from scratch had been the dream of Michael Woolfson, managing director of Greenford Caravans, for many years. His first park was Cavendish Park at Sandhurst and, although small, he achieved good standards there but was hampered by an existing layout of single units. The search for a park which he could design himself was a long one, but he eventually heard of an area on Box Hill (near Dorking in Surrey) which was a very run-down holiday park (but with a 365-day license).

It had been called Lochiel Rest Camp and occupied a beautiful position, on the Northern slopes of Box Hill adjoining National Trust land. Although the existing planning permission was for holiday use, the park had been used residentially during the war to house people who had been bombed out of London. This factor was a material consideration during the two-and-a-half years of High Court action and a Public Inquiry which finally resulted in permission being granted for 40 park homes. That was in late 1983. Mr Woolfson and his company then embarked on a very exciting programme to make the park (renamed Merrywood) into one of the finest in the South-East.

Despite the planning permission being for 40 homes, there are, in fact, only 39 on the park – a mixture of Omar Ashdale twins, Omar Waveney 12-wides and three Omar Sheringhams. Each has a Marley garage (19ft long) alongside the home and this is plenty of space (plus a light and twin power point) for a freezer or workbench at the back. Most of the garages also have long drives so that there is room for visitors’ cars to be parked off the estate road. Mr Woolfson’s aim from the start was to develop Merrywood to the very highest standards possible and mains gas was a chief priority. He was able to arrange for both gas and electricity to be supplied by the respective Boards directly to each home. Automatic street lighting is installed and, naturally, all cables are underground – there are no overhead wires to spoil the park’s lovely views across the North Downs.

The park is not hard to find. Box Hill village is signposted up the B2032 off the main A25 which runs through Guildford, Dorking, Reigate and Redhill. Once in the village, another sign leads you down Ashurst Drive and Merrywood Park is about a quarter of a mile down this road. The entrance is impressive, with an ornamental brick wall incorporating the park’s name and from this entrance you enjoy a vista down the slope of Waveneys on the left and Ashdales on the right. All the homes have Decra-tiled roofs and UPVC double glazed windows plus Baxi mains gas central heating. The park has an L-shaped layout.

The first phase to be developed was the straight arm of the ‘L’ which went down the hill and the second phase turned the corner and at this point twins were placed on the left of the road and the 12-wides on the right. The three 42ft Sheringhams are at the far end of this road. The park is intended for semi-retired and retired people but, because of the open plan layout, pets are not allowed. Central London (22 miles away) and the South Coast (Brighton is 35 miles away) are within easy reach by road and rail and the nearest access to the M25 is around four miles from Merrywood. The main part of Box Hill village is a ten minute walk away.

The first phase of the development was completed in 1986 and officially opened by television personality, Arthur English. Demand was brisk and the first phase quickly filled up, as did the second.

Michael Woolfson told us that he aims to keep everything up to a very high standard. The development was architect-designed in the first place and was carried out on the basis that the company was going to hold the park as a long-term investment. ‘If anything needs repairing, we try to do it quickly.’

One couple who had moved to Merrywood told us they had always been interested in park homes and when retirement came they began to look around parks. When they saw Merrywood they knew it was the right place for them. The selected Surrey because they were both originally from the South and now have son living in Wandsworth and other relatives in Sutton and Mitcham, so Merrywood Park is an idea location and very handy for family visits.

They enjoy working in the garden (and, on the day of our visit, they were enjoying the fruits of their labours, sitting outside their home in the glorious sunshine). They are members of the National Trust and are keen to visit as many properties as possible. They have seen all those in Kent and Surrey and are hoping to explore those in Sussex this year. They told us that at the far end of Merrywood Park there is a footpath which leads right across the Headley Valley with beautiful views all around. Although there are a couple of general stores and post office in Box Hill village, they usually go to Leatherhead for their shopping.

Another couple recounted how they greatly enjoy seeing and feeding the pheasants that visit their back garden. Another couple had seen an article about park homes in The Sunday Times which featured Merrywood and decided to have a look at it. They used to live in Bagshot and had never seen a park home before. They were very impressed with both the homes and the park and find that they now have plenty of time on their hands as maintenance of the home and housework occupy so little. Not that they were complaining. They told us that, as the years rolled by, they had found the garden of their previous house getting bigger and bigger and the stairs steeper and steeper!

Michael Woolfson told us that the development of Merrywood Park had been most interesting and exciting for him and he would like the opportunity to try something similar again – but the problem is finding a suitable location.

About three-quarters of Merrywood’s residents came either from London postal districts or from counties South of London. A lot of them moved to Merrywood because its position was so handy for major road and motorway networks which would enable them to see their families regularly.

Each home has its own parking space in front of the garage and there are also two visitors’ car parks providing additional space. We’ve already stated that the whole development was carried out to a very high standard and Mr Woolfson told us that even the fire points were ‘architect designed’ and the road humps (to keep down speed) were to the Road Transport Research Authority’s specification.

Article is an edited version of ‘The Park Profile’ Park Home Magazine – reproduced by kind permission.

To return to the Press page, please click here or to read more, visit our Blog area. 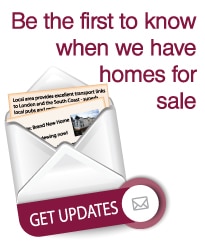